Warning: Use of undefined constant í128Mí - assumed 'í128Mí' (this will throw an Error in a future version of PHP) in /homepages/44/d160651214/htdocs/aworkinprogress/wp-config.php on line 91
 Saggy "girls" and too much cake - My Life: A Work in Progress

Saggy “girls” and too much cake

I’m returning to my blogging roots with this post. I’m going to ramble on about my personal life and thoughts. While pregnant, I remember reading online forum threads where some women would say breastfeeding ruined their breasts, while other women insisted nursing didn’t change anything. Well, nursing changed my boobs. I’m not going to say they’re ruined -yet- but they’re…different. As I’ve started to wean Baby J, and really over the last 6 months, they’ve gotten smaller. The cups on my nursing bras are now too small, and the bras are pretty much destroyed. There’s no support, and my girls are saggy. I had no idea they were until my vacation in SC the other week. I put on my pre-pregnancy tankini. I thought since my boobs are larger right now than before I was pregnant, that I would fill out the suit and just look all around better up top. Nope. The suit gave my breasts no support, and I realized they sagged. It was so depressing. I tried on my pre-pregnancy bras, but they’re too small in the band and cup. I’ve been reading up on post-nursing bras, and apparently it can take six months after weaning for breasts to settle in shape and size. With that in mind, there’s no point in me spending a bunch of money on bras right now, but I need to do SOMETHING to make them look better! I think I’m going to measure myself with Hubby’s help, and then buy one or two inexpensive bras from Target. They may not be great, but at least they’ll be the right size.

Now, my weight loss/fitness goals… I was doing really well, but this week, I’ve just been eating too much, and exercising too little. I blame my Aunt Flo. She brings exhaustion and cravings. I have to get back on track. I’m so close now to where I want to be; I can’t afford to fall off the wagon. I’ve lost at least 30 pounds since I had Baby J, and I’d like to lose another 10 or 15. Provided, that is, that I keep gaining muscle and tone up. It’s not logical, but the more weight I’ve lost, the more unhappy I’ve gotten with my body. And it’s not about being THIN, it’s about being FIT. I want to be toned. I want my saggy stomach to be lined with muscles again. I don’t think it’s impossible, but I want it NOW. Of course, that’s not going to happen. It takes a lot of effort to be in shape. I wish I had more self control.

Sesame Street partners with the USO 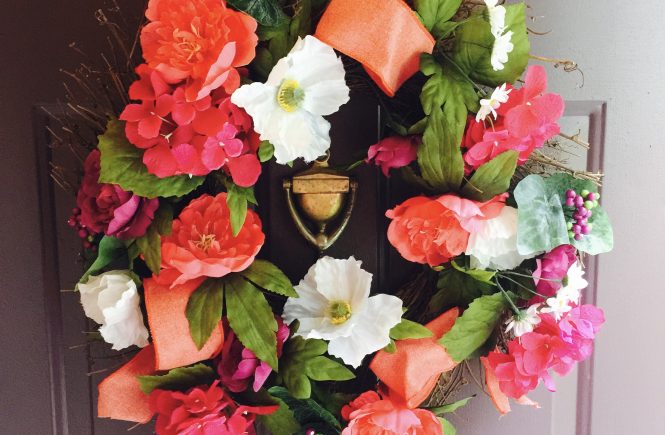 How to hang a wreath without damaging your door