Warning: Use of undefined constant ĺ128Mĺ - assumed 'ĺ128Mĺ' (this will throw an Error in a future version of PHP) in /homepages/44/d160651214/htdocs/aworkinprogress/wp-config.php on line 91
 National Air and Space Museum annex Chantilly Virginia 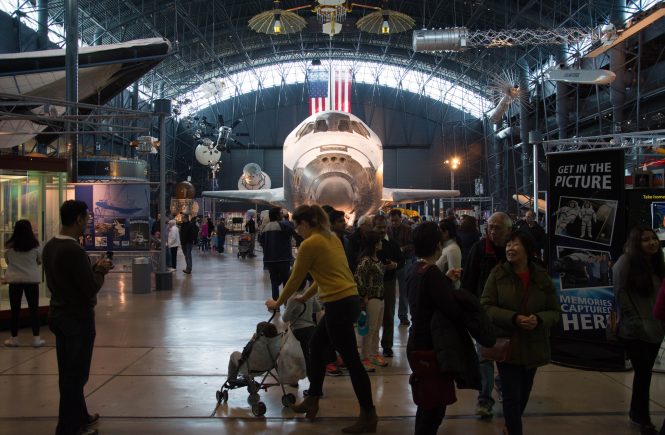 My mom, my brother, his wife, and their four children came to visit me and Little J for the Thanksgiving holiday. Hubby (Big J) was still in Florida for Navy training. We went together to the┬áSteven F. Udvar-Hazy Center over by Washington Dulles International Airport in Chantilly, Virginia. The center is an annex for the National Air and Space Museum, which is in DC. Some of the Smithsonian’s larger planes and the space shuttle Discovery are located at the annex. Like all Smithsonian museums, the annex is free; however, we did pay $15 for parking.

The museum has a gift shop, plenty of restrooms, and a McDonald’s, which was good since there didn’t seem to be any places to eat within walking distance of the museum.

There were a lot of neat planes here, but I found most interesting the Lockheed SR-71 Blackbird, the Space Shuttle Discovery, and the “Enola Gay.”

Although the last flight of a Blackbird was in 1990, it still holds the world record for the fastest jet-propelled aircraft!

When Discovery retired, it was the oldest orbiter, and it had traveled more miles in space than the others. I never saw Discovery fly, but as part of a military education summit hosted by NASA in 2011, I witnessed the last launch of the Space Shuttle Endeavor from VIP seating at the Kennedy Space Center in Florida. It was an amazing experience, and I find space shuttles in general fascinating. Since Endeavor is now in Los Angeles, Discovery is the next best thing.

The history of the “Enola Gay” is sobering. If you don’t recognize the name, this bomber is the aircraft that dropped the first atomic bomb on┬áHiroshima, Japan, in 1945. I noticed that there was plexiglass in front of the aircraft when you’re standing on the second level. I looked it up online later and discovered that apparently on opening day, a peace activist threw a can of red paint at the plane, denting it, so now there’s plexiglass to protect the plane from any more damage.

Overall, the museum was very interesting especially since I enjoy learning about history. Little J and the kids seemed to enjoy themselves, although they were tired of walking after an hour or so. Fortunately, there are benches placed strategically around the museum!

Have you been to the Steven F. Udvar-Hazy Center (the annex) or the National Air and Space Musem? If you’ve been to both, which did you prefer?

TOO MUCH ICED COFFEE??? IS IT POSSIBLE???