Warning: Use of undefined constant ĺ128Mĺ - assumed 'ĺ128Mĺ' (this will throw an Error in a future version of PHP) in /homepages/44/d160651214/htdocs/aworkinprogress/wp-config.php on line 91
 Milestones, strollers, baby-wearing, and co-sleeping - My Life: A Work in Progress

It’s been a while since I did an update on how things are going with me and my new world of mommyhood.

Baby J is about 5 months and 1 week old. He’s been sitting up for couple of months, but had to lean forward with his weight on his hands to balance. He just started balancing yesterday without his hands! Look at my big boy (ignore the sock coming out of his head): 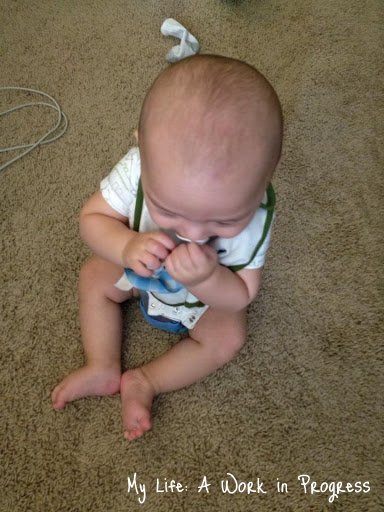 He has a really big head, I know. He’s like Megamind.

Baby-wearing advocates may not like to hear this, but I’m pretty sure that he’s sitting up this well because I’ve been using the stroller the last few weeks, not the carrier. Don’t get me wrong, I think baby carriers have their place, most definitely, and I’m sure they do help babies work out their core muscles. But the last few weeks, we’ve been spending long hours away from home, and the stroller is great for this. I can recline it so Baby J can sleep. He doesn’t sleep that well in his carrier now that he’s bigger. I have a place for the diaper bag (I always take a big one if we’re going to be gone for long), a wet bag for used diapers, shopping bags, cups, sunglasses, baby toys, etc. When he sits in the stroller, he does not want to lean back. He’s been insisting on sitting straight up, away from the back rest of the stroller, and I think he’s just really been developing those core muscles due to this.

We also stopped co-sleeping (for the most part) with Baby J. Co-sleeping advocates won’t like this one either, but Baby J is sleeping better away from us.┬áAfter observing him in the bedroom with J and I, I realized he most likely would sleep better away from us. He’s a light sleeper, and my husband is a terrible snorer. I usually come to bed late, and that also wakes him up. If one of us gets up to use the bathroom, that wakes him up too, etc. We finally set the crib up, bought a monitor, and he’s been in his own room for about a week. I still usually bring him into bed with me once J leaves for work, but other than that…he’s on his own. And it’s working. He’s sleeping much better and for longer periods. Initially, I would go in his room constantly to check on him, but most of the time when I would do that…I end up waking him up. Oops! I think if we’d done this sooner, we all might have had more sleep, but I think the lack of sleep was worth it to have him close to us when he was going through the highest SIDS-risk age. I don’t worry as much about him now that he’s older, bigger, and very good at rolling.

In a few weeks, I’ll be starting Baby J on solids, and I’m excited to reach this new milestone! I haven’t decided yet what foods to start him with. I’ve talked to a bunch of other moms and gotten so many different opinions. I do not plan on practicing baby-led weaning for a couple of reasons, one being that I have a Baby Brezza my mom bought me, so I’m going to get use out of the thing!

What do you suggest? What food should I start with? Veggies, fruit, meat, cereal?

A Family Outing: The National Zoo

What do you think of law firms?