Warning: Use of undefined constant ĺ128Mĺ - assumed 'ĺ128Mĺ' (this will throw an Error in a future version of PHP) in /homepages/44/d160651214/htdocs/aworkinprogress/wp-config.php on line 91
 Chicken, kale, and mushroom white pizza- My Life: A Work in Progress 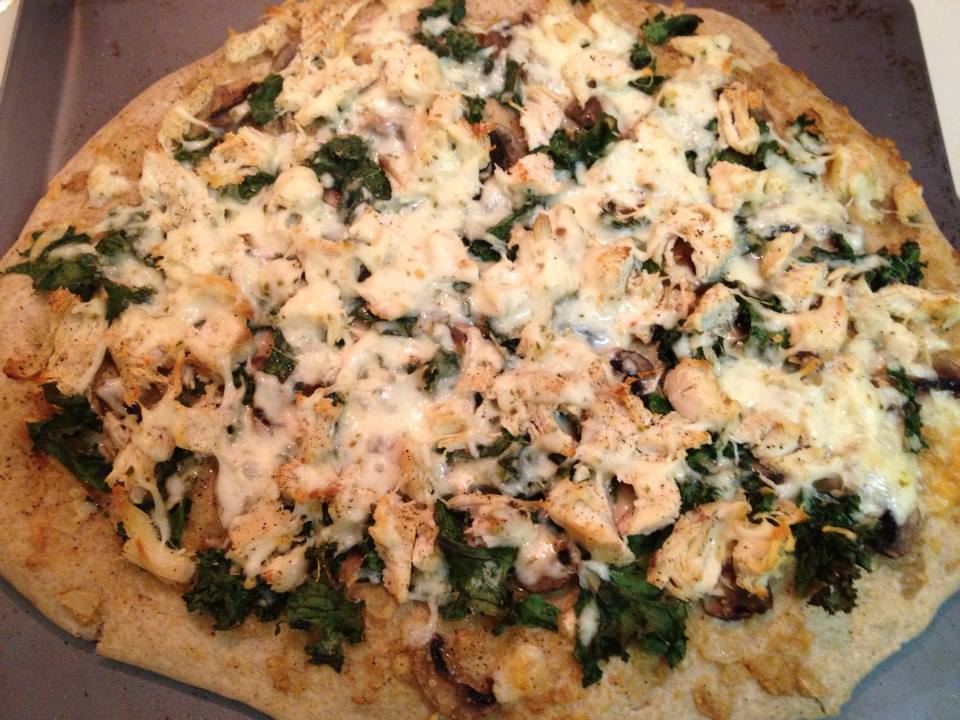 Did you read my pledge to eat only unprocessed foods this month? A few friends of mine are taking the challenge as well, and it’s exciting to see what everyone’s coming up with as far as meal plans.

Last night I made a roasted chicken, kale, and mushroom white pizza.

For the dough, I used my bread maker on its dough setting. I’m so glad someone gave that to me as a wedding present! We don’t eat a lot of bread, but the machine has been indispensable for when we do and also when I want to make pizza dough. I can make pasta sheets with it too, but I haven’t tried that yet.

For the sauce, I sauteed a small chopped onion, then tossed in two gloves of chopped garlic. After they were translucent, I turned the heat down, let the pan cool a bit, then poured in a cup of heavy cream and two tablespoons of olive oil. I brought the mixture to a rolling boil, then whisked in a teaspoon of flour.

Next, I turned the stove top down to low heat and let the mixture simmer until it thickened. After that I turned it off, let it cool, and refrigerated the sauce until I was ready for it.

I roasted some chicken breast with salt and pepper in the oven. Once it was cool, I just chopped and shredded it into the size I wanted. I also washed and sliced some onions and kale. For the cheese I used pepper jack. Mozzarella probably would’ve made more sense, but pepper jack is what I had.

I’d use less dough. The majority of the calories in this pizza are in the dough. Next time, I’ll freeze half the dough and then use the rest to make a thinner crust. Hubby also would like me to add more garlic to the sauce, so I will. I also thought it could use a little more sauce, so I may double the recipe.

All in all…it was really tasty, and I was pleased with how it turned out!

Do you make your own pizza? What are your favorite toppings?

Don’t trifle with this trifle!!!! (my favorite dessert)