Warning: Use of undefined constant í128Mí - assumed 'í128Mí' (this will throw an Error in a future version of PHP) in /homepages/44/d160651214/htdocs/aworkinprogress/wp-config.php on line 91
 Easy shrimp ceviche recipe- My Life: A Work in Progress

How to make shrimp ceviche

I’m a big fan of seafood. That was one thing I really loved about living in Florida. FRESH seafood. Sure, we’re in Virginia now, and you’d think we’d have fresh seafood as well, since we’re on the ocean…but that’s not always the case.¬ÝI also love food with a lot of flavor and spice, and I’ve never been afraid of trying new things. A dish that I’ve come to love over the last couple of years is ceviche.

Ceviche (pronounced “seh-bee-chay”) is a Central and South American seafood salad that’s been marinated in citrus.¬ÝIt is traditionally made with raw fish, but I also love it with shrimp. I made this particular dish with steamed shrimp to ensure there was no possibility of food poisoning. Hubby would never trust my cooking again ever if I poisoned him.

I would give you the link to the recipe I followed, but I actually didn’t end up following a particular one. I had pinpointed a recipe and written¬Ýdown my ingredient list, but forgot to save the link. I came home with groceries and couldn’t find it again! I ended up flipping through some Web sites and reading a few recipes, and figured out what to do. It’s really not difficult.

I didn’t have enough limes, and I was out of lemons, so I used the bottled juice. Also, the ingredients that I used can all be adapted to fit your tastes. You might like ceviche with more cilantro and less ketchup, so this is definitely a recipe with which I’d recommend experimenting.

While I let the shrimp marinate, I chopped up my veggies, tossed them in the bowl, added my sauces and spices, and mixed it all together. 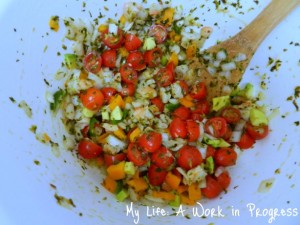 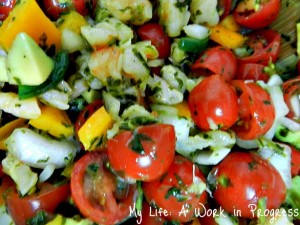 I let the ceviche sit covered in the fridge, until it was time to serve chilled. 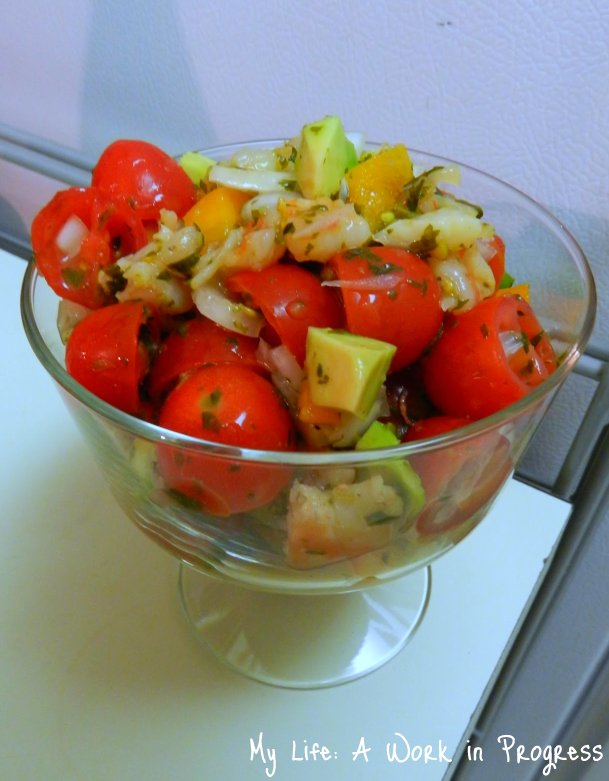 Do you like ceviche? What are some of your favorite ingredients? 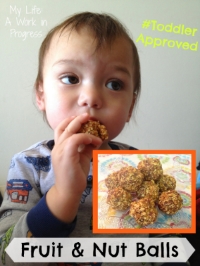 Fitness Friday: The Game On! Diet