When I spotted Barry’s Toys on Etsy, I never dreamed I’d have so much to chat about with Barry Linder, the artisan behind these handcrafted toys and puzzles.Ā Although he now lives in Ireland, Barry was born and raised in Canada, like myself, before moving away. He also spent several years living in Spain, and my husband, son, and I will be moving to Spain in the next fiscal year. Barry is also a successful published author in Ireland, and as a blogger and former military journalist, I envy him that!

Barry began working with wood when he was 17 years old. For two years he restored antique furniture, before starting a 20-year career working on roofs in Western Canada, applying cedar shakes. Barry’s wife was a Montessori teacher, and he often helped her put the toys away at the end of the day.

Combining his love for wood with the designs he saw through his wife’s Montessori experiences, Barry began making wooden toys for his little grandson.

Little Smoky measures 61/2″ by 6″ by 6.” Although the train can be easily pushed along, Little Smoky is attached to a small cord and wood “handle,” so Baby J can pull his train along behind him.

According to Barry, this is how each toy is made:

First I draw the character, usually from a picture on the net or a book. After making the image my own it goes onto the easel and I paint it in acrylics.
I use a company that has very expensive copiers that will take my painting and make it any size that would suit the toy. The image is copied onto very good waterproof paper that holds the colour beautifully.

I cut the picture as carefully as is possible and draw its outline on a handpicked piece of sustainable wood. The silhouette is carefully cut out and sanded. With child-friendly crafting glue the picture is glued to the cut-out. The other side has the outline of the painted picture but painted solid, glued on as well. The rails for the axels are cut out and sanded, drilled for the axels, wheels are made and sanded and attached to the axels using child friendly wood glue. After the toy is complete and sanded again it is sprayed with salad bowl lacquer. After drying it is sanded lightly and lacquered again.

Baby J turned 8 months old yesterday and has been cruising for several weeks, but he definitely isn’t to the point yet where he can walk independently and pull Little Smoky along behind him. But that doesn’t matter to Baby J. He loves Little Smoky anyway! 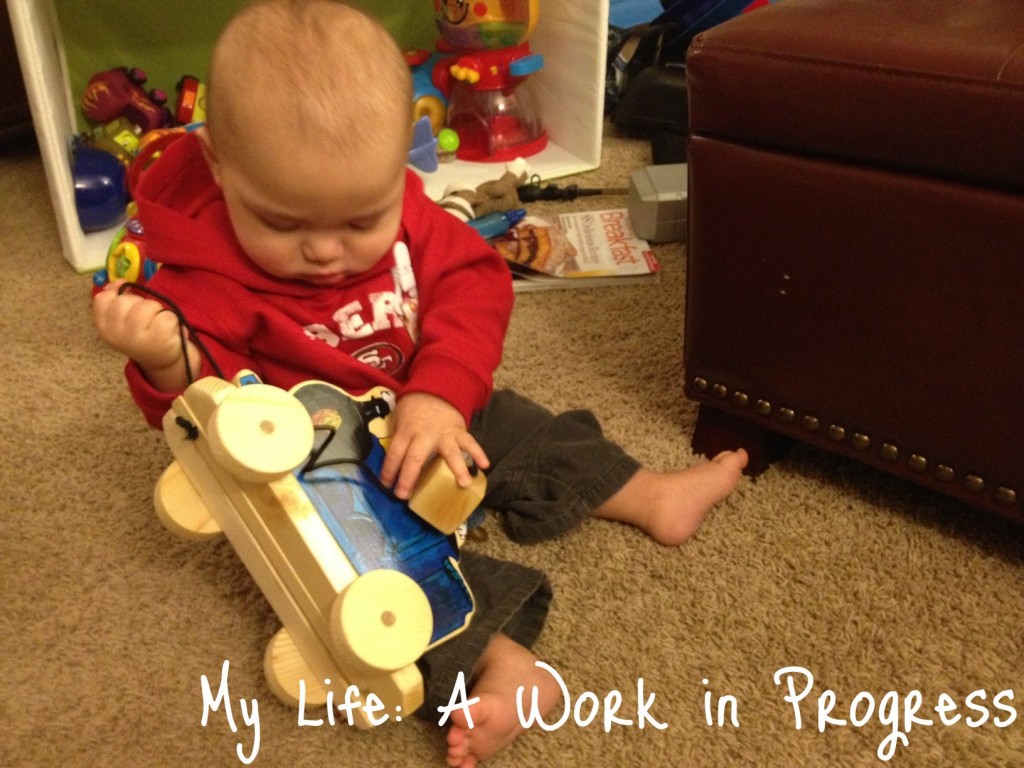 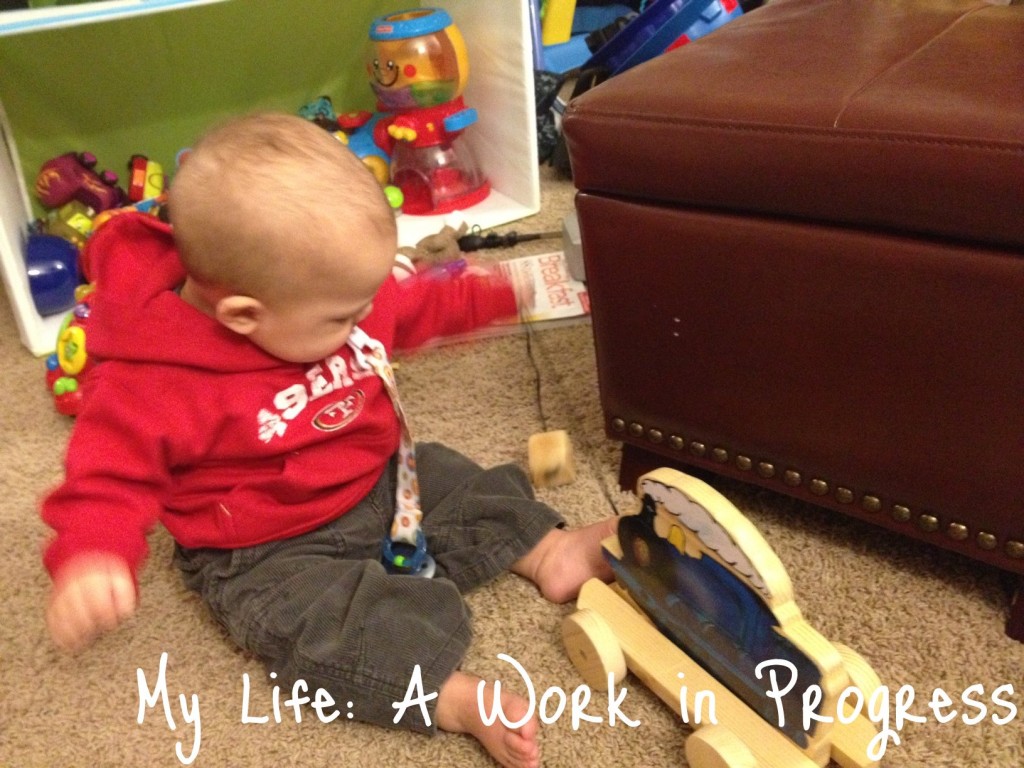 I tugged and pulled on the wheels and nothing came apart, so it’s sturdy. I wasn’t trying to destroy it; I just wanted to put a little pressure on it, similar to what a child might do.

The only cautionary note I have is that the cord obviously presents a strangulation hazard for infants, so I believe this toy is really meant for older children. Since Baby J loves it and wants to play with it, we’ll probably remove the cord and handle for now. We can easily attach the same or different cord later.

Want to learn more about Barry’s Toys? Visit Barry’s Etsy shop or his Web site! Barry has graciously agreed to sponsor a wood toy for the Bellies to Babies giveaway hop Jan. 5-14, so you could win your own gorgeous, handcrafted wood toy!

Note: I received a complimentary wooden toy by Barry’s Toys to review andĀ was not compensated for this post.Ā I was not asked to write a positive review, and the opinions expressed above are my own and may differ from those of others.