Warning: Use of undefined constant ĺ128Mĺ - assumed 'ĺ128Mĺ' (this will throw an Error in a future version of PHP) in /homepages/44/d160651214/htdocs/aworkinprogress/wp-config.php on line 91
 pocket diapers Archives - My Life: A Work in Progress

I received a free┬áShopDiaper brand one-size pocket diaper in yellow to review (see the bottom of this post to find out how you can get one for free too!).┬áThe outside of this diaper is made with a waterproof fabric called polyurethane laminated, or PUL. The diaper feels a little thin to me, so I don’t know that it’s something that will last for years. It’s a very inexpensive diaper to purchase, so it makes sense that the quality likely┬áisn’t as┬áhigh as a diaper that costs much, much┬ámore.┬áI’ve washed this pocket diaper several times, and it’s held up so far, but obviously only time will tell. If I do have any issues, I will update this post.

The inside┬áfabric of┬áthis diaper is suede cloth. This is actually one of my favorite fabrics to use if I sew cloth diapers myself. Suede cloth wicks moisture from skin, which I really like. My son’s skin┬áseems to be particularly sensitive, so if I use a cotton or bamboo diaper on him, I often end up putting in a strip of fleece or another moisture-wicking fabric, so he doesn’t end up with a rash.┬áI don’t have to add the fleece with this pocket diaper.

It’s a one-size diaper. One-size┬áusually means the diaper will┬áfit most babies from birth through potty training. However, this ShopDiaper brand pocket diaper seemed bigger to me than many of our other diaper brands. I think this diaper would be too big for a newborn, but that makes it a good,┬áinexpensive┬áoption for large babies or older toddlers.

The only thing that I didn’t like about this diaper was the insert. It’s made of microfiber terry, which is good. I find that to be a very absorbent fabric┬áthat’ll take a beating in the wash. But this┬áinsert seemed thin, and it’s not very long. In fact, I almost wonder if I received a newborn insert. (Now that I think about it, I wish I had a photo of this insert next to a BumGenius insert, to give you an idea on the size. I’m out of town though, so I’ll have to add one later this week…be on the lookout for that!)

For nap time, I’ve been adding a second insert (different brand) to the pocket to make up for the small, thin insert. If he’s just playing inside, I’ll leave in the insert, but change him after about an hour. Sometimes┬áthe insert is still fairly dry, but if he’s been drinking a lot,┬áthe insert will be pretty saturated.┬áAgain though, I think it’s a matter of having realistic expectations for the price you pay (and for me, that was nothing).

If you need a truly inexpensive cloth diapering┬áoption, stop by ShopDiaper.com to see what they have. The diaper I received from them┬ácurrently retails for┬ájust┬á$4.99. Cotton inserts start at $4.99 for a three-pack, and microfiber start at $5.99 for three.

Right now, you can get a FREE diaper with your order of $1 or more. Just click HERE ┬áfor details.

Welcome to the New Baby, New Fluff Giveaway Hop hosted by Coping with Frugality and Eco Baby Mama Drama. In celebration of Amanda’s (from Coping with Frugality) new baby boy, My Life: A Work in Progress and the other participating blogs are excited to be bringing you fluffy prize packages each with a value of at least $25.

Make sure you enter to win the fluffy Grand Prize valued at over $125!! Then hop to all the other blogs listed on the linky below the Rafflecopter form and enter to win their cloth diapering prizes! Good Luck!

Here on My Life: A Work in Progress, you have the opportunity to win a pocket diaper from Little Butt Diapers and a set of 3 pure wool organic dryer balls from Moss Creek Wool Works!

Little Butt Diapers is a line of unique cloth diapers made by a Marine wife and WAHM. Read my review HERE. You could win this Very Hungry Caterpillar pocket diaper (retail value $23)! 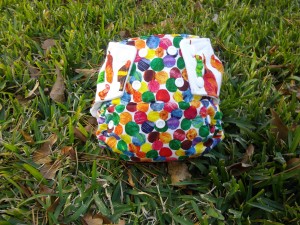 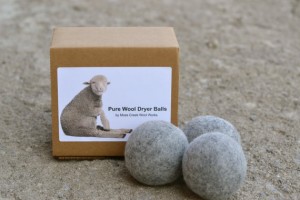 If you agree to the Terms and Conditions, enter below!

Terms & Conditions:┬áThis giveaway is open to U.S. and Canadian residents. Void where prohibited by law. You must be 18 years of age to enter. No purchase necessary. Chances of winning depend on total number of eligible entries. My Life: A Work in Progress is not responsible for the shipment of prizes. Prize sponsors -Little Butt Diapers and Moss Creek Wool Works- are responsible for prize fulfillment and the shipment of prizes. I did not receive compensation for this post or giveaway. 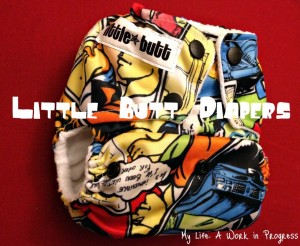 My husband is a Staff Sergeant in the Marine Corps, and he was deployed for the birth of our son. After he returned I was introduced to cloth diapering by a fellow Marine wife; I thought she was nuts! Then, after researching, and researching, and researching some more I was intrigued but still unsure. My husband was actually the one who said just buy some! (He’s probably kicking himself for that ­čÖé After I was addicted (it happens to us all!!!!), I was so disappointed that I couldn’t find cute boy prints. So I thought I would start making them! Little Butt Diapers was born! I named it after my son; my husband has called him “Little Butt” since the day he met him for the first time. I started in North Carolina. I’m in Illinois at the moment, and we will be in sunny San Diego at the end of March! I like to think that my diapers are affordable, and I’m proud to specialize in boy prints, with a few super cute girl ones! -Hope

Hope sent me a pocket diaper in a vintage comic book print to review. This is a one-size diaper that fits most babies from 8 to 40 lbs, because of the rows of snaps along the rise and waist. You can adjust the diaper’s size, depending on where you snap it. 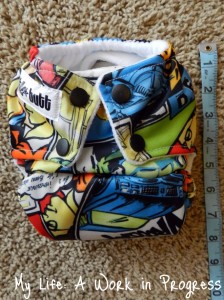 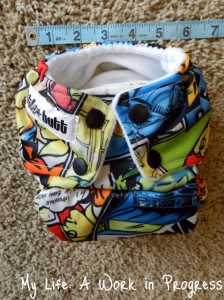 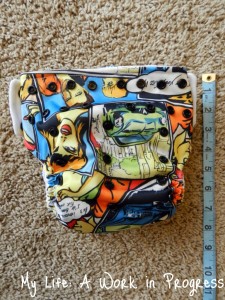 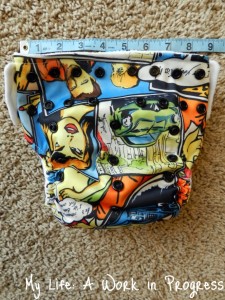 The outside of this diaper is made with waterproof PUL fabric to keep moisture (and messes!) locked inside.

The inside of this diaper is made with anti-pill micro fleece. Since it’s a “stay-dry” fabric, it wicks moisture away from baby’s skin and into the insert. 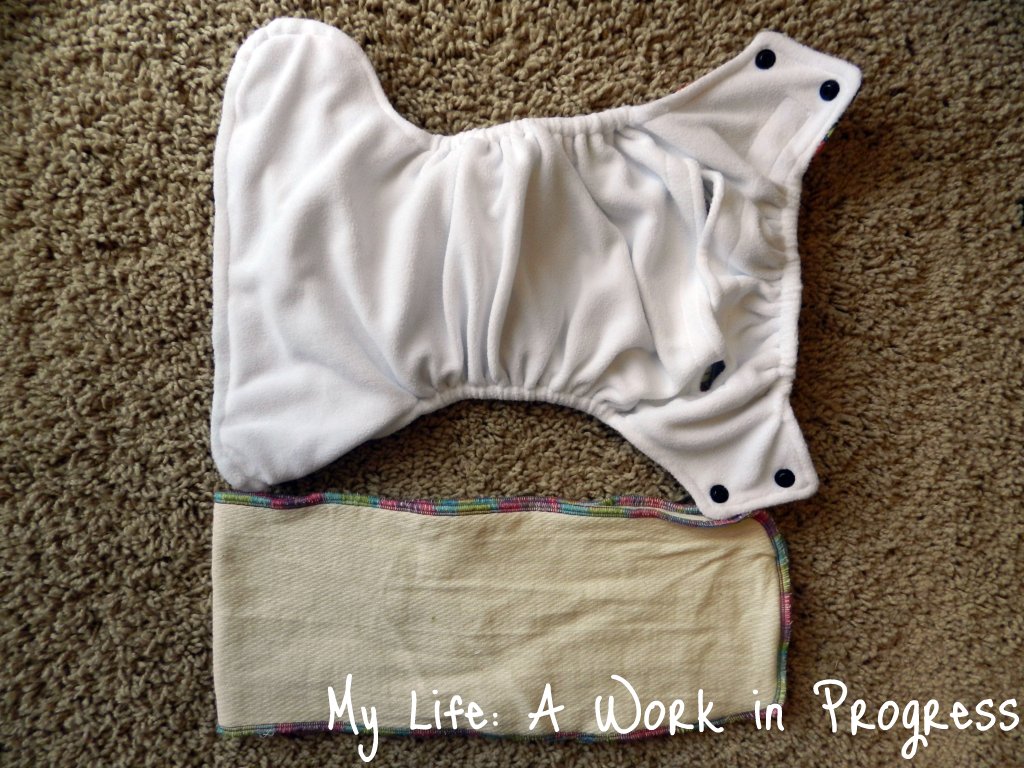 The insert is made with 100% unbleached birdseye cotton. 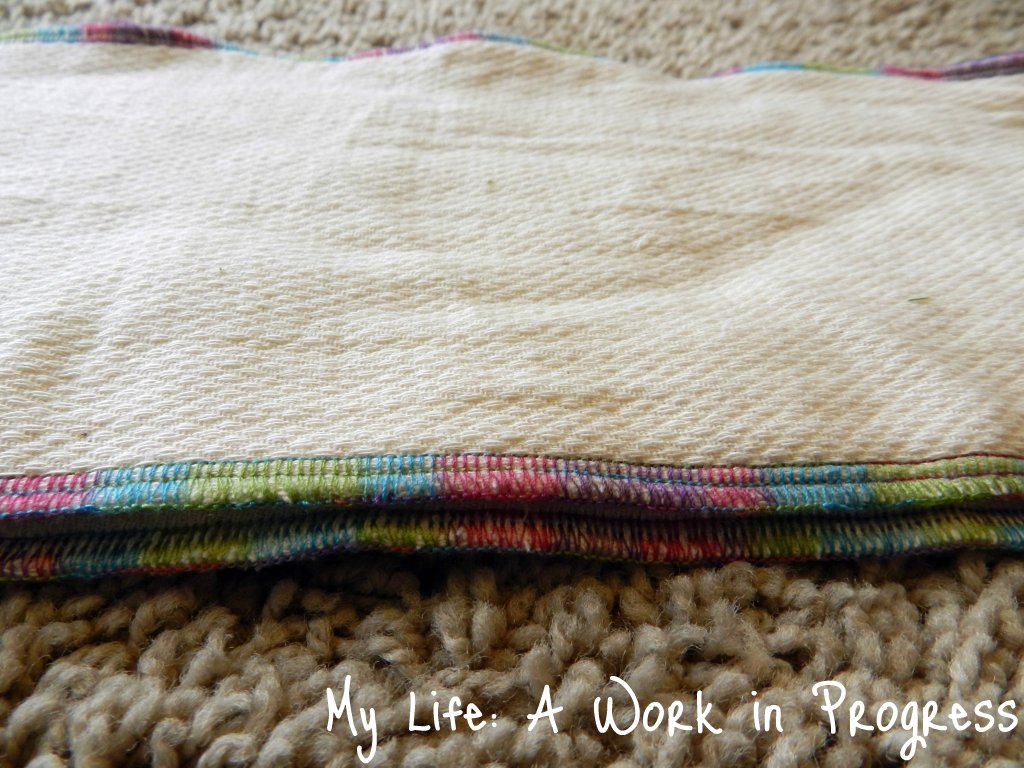 It’s about 13″ folded over, making it more than 2′ in total length. You can fold the insert different ways, making it thicker in the front or the back for extra protection, if you like. 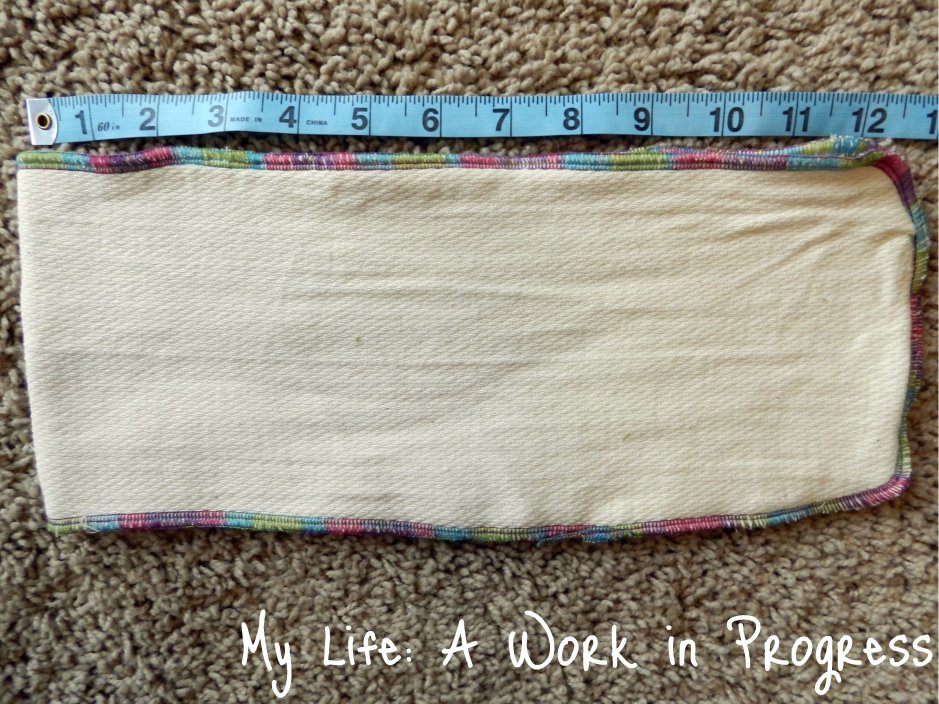 The insert slides into the diaper’s pocket to absorb moisture. The pocket is designed so the insert will agitate out during the wash- you don’t have to handle a dirty insert when doing your diaper laundry! 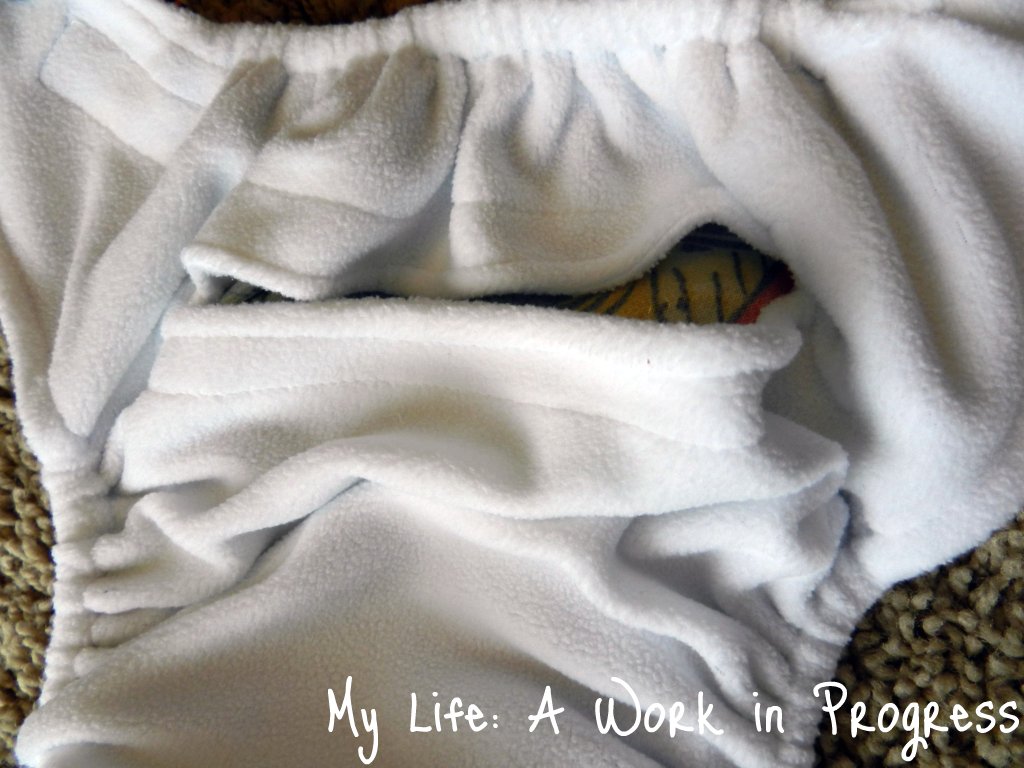 I love the tab design of this diaper- it’s my favorite style! The comic book print is unique and adorable. The diaper is very absorbant, and really, really soft. It seemed stain resistant too. I don’t have anything negative to say about this diaper! I would definitely recommend Little Butt Diapers. 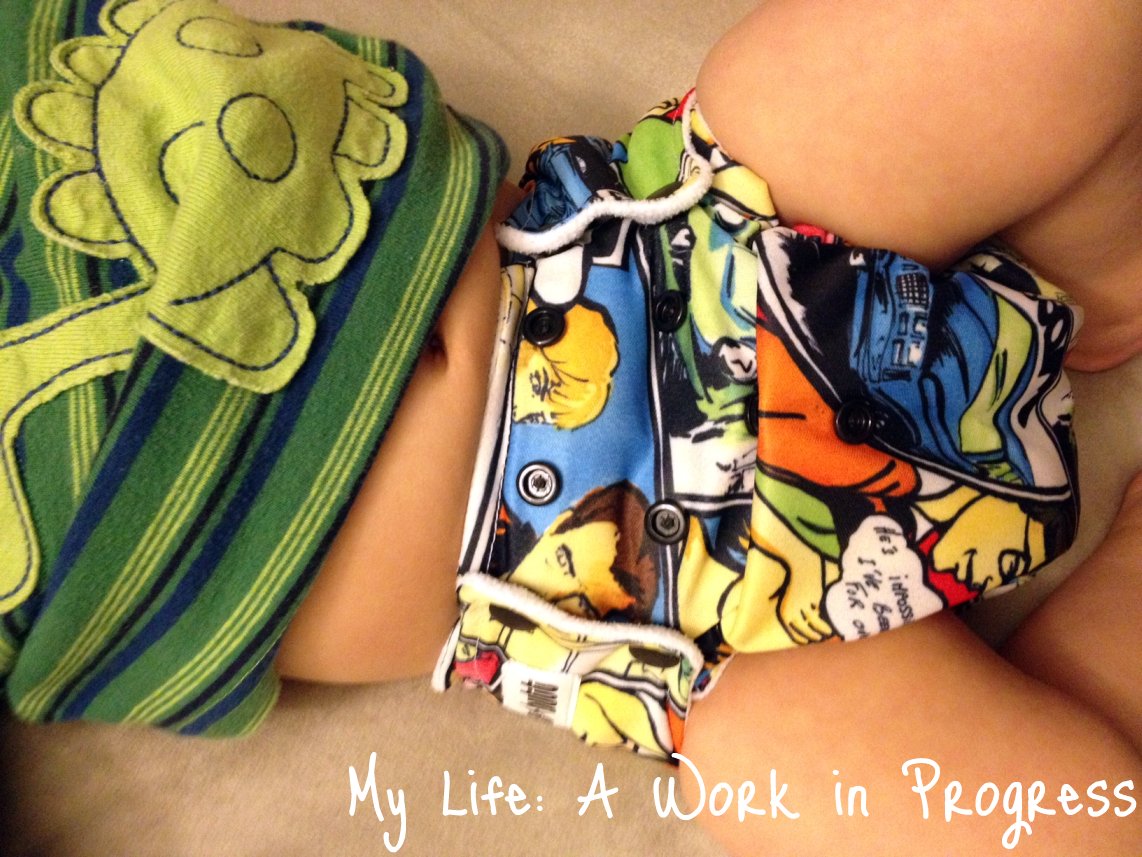 There’s plenty of room to grow!

Want to win a Little Butt Diaper? Hope has generously agreed to sponsor a prize right here on My Life: A Work in Progress during the New Baby, New Fluff blog hop March 6-20! Stay tuned to enter!

Note: I received a complimentary pocket diaper from Little Butt Diapers to review and┬áwas not otherwise compensated for this post.┬áI was not asked to write a positive review, and the opinions expressed above are my own and may differ from the opinions of others.┬á 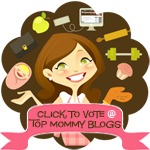