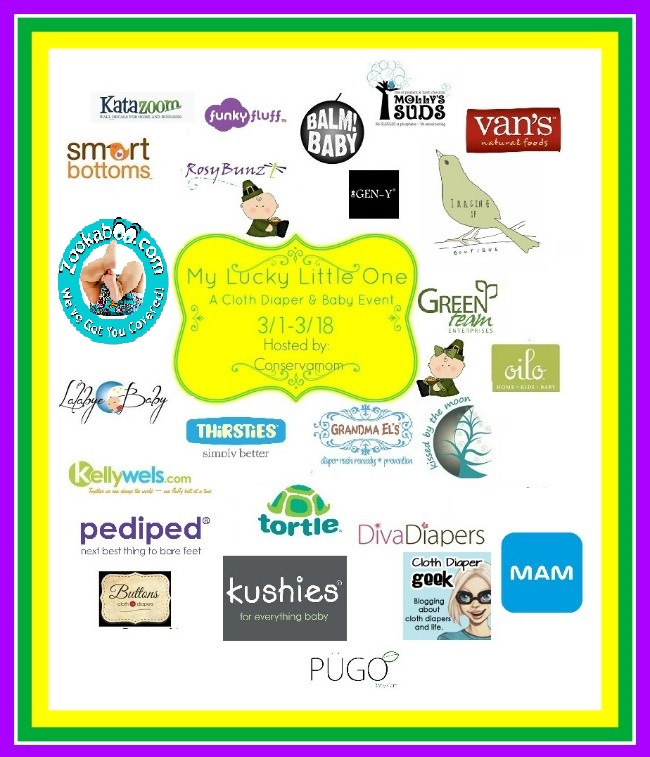 Welcome to the My Lucky Little One Giveaway Event!

Where one “Lucky Little One” will win a grand prize valued over $695!

With 13 cloth diapers as well as some great accessories, this prize pack will be someone’s pot of gold! Baby J has several of these diapers listed below, and I can attest that they are great quality! Not only will the winner get all of them, but he/she will also receive several baby and kid products. Keep scrolling to see the prizes and to enter. Imagine If Boutique
Wooden Toy Coyote made of wood sealed with beeswax for hours of imaginative fun! $9.00 Keep scrolling down to the Rafflecopter widget to enter.

Winner will be verified and must be a fan of all the sponsors to win.

Disclosure- My Life: A Work in Progress nor Conservamom are responsible for the fulfillment of prize. This blog was not financially compensated for giveaway. This giveaway is in no way associated with, sponsored, administered, or endorsed by Facebook, Twitter, Google, Pinterest or any other social media network.Ā All opinions and experiences are my own. Open to the US, must be 18+. Confirmed Winner(s) will be contacted by email and have 48 hours to respond before a new winner will be drawn. No purchase necessary. Void where prohibited by law. The sponsor(s) will be responsible for product shipment to winner(s) of the giveaway. Sponsor will be responsible for prize fulfillment. The disclosure is done in accordance with the Federal Trade Commission 10 CFR, Part 255 Guides Concerning the use of Endorsements and Testimonials in Advertising. For questions or to see your product featured in the next Big Event you can contact Elia At Conservamom.

I received a freeĀ ShopDiaper brand one-size pocket diaper in yellow to review (see the bottom of this post to find out how you can get one for free too!).Ā The outside of this diaper is made with a waterproof fabric called polyurethane laminated, or PUL. The diaper feels a little thin to me, so I don’t know that it’s something that will last for years. It’s a very inexpensive diaper to purchase, so it makes sense that the quality likelyĀ isn’t asĀ high as a diaper that costs much, muchĀ more.Ā I’ve washed this pocket diaper several times, and it’s held up so far, but obviously only time will tell. If I do have any issues, I will update this post.

The insideĀ fabric ofĀ this diaper is suede cloth. This is actually one of my favorite fabrics to use if I sew cloth diapers myself. Suede cloth wicks moisture from skin, which I really like. My son’s skinĀ seems to be particularly sensitive, so if I use a cotton or bamboo diaper on him, I often end up putting in a strip of fleece or another moisture-wicking fabric, so he doesn’t end up with a rash.Ā I don’t have to add the fleece with this pocket diaper.

It’s a one-size diaper. One-sizeĀ usually means the diaper willĀ fit most babies from birth through potty training. However, this ShopDiaper brand pocket diaper seemed bigger to me than many of our other diaper brands. I think this diaper would be too big for a newborn, but that makes it a good,Ā inexpensiveĀ option for large babies or older toddlers. The only thing that I didn’t like about this diaper was the insert. It’s made of microfiber terry, which is good. I find that to be a very absorbent fabricĀ that’ll take a beating in the wash. But thisĀ insert seemed thin, and it’s not very long. In fact, I almost wonder if I received a newborn insert. (Now that I think about it, I wish I had a photo of this insert next to a BumGenius insert, to give you an idea on the size. I’m out of town though, so I’ll have to add one later this week…be on the lookout for that!)

For nap time, I’ve been adding a second insert (different brand) to the pocket to make up for the small, thin insert. If he’s just playing inside, I’ll leave in the insert, but change him after about an hour. SometimesĀ the insert is still fairly dry, but if he’s been drinking a lot,Ā the insert will be pretty saturated.Ā Again though, I think it’s a matter of having realistic expectations for the price you pay (and for me, that was nothing).

If you need a truly inexpensive cloth diaperingĀ option, stop by ShopDiaper.com to see what they have. The diaper I received from themĀ currently retails forĀ justĀ $4.99. Cotton inserts start at $4.99 for a three-pack, and microfiber start at $5.99 for three.

Right now, you can get a FREE diaper with your order of $1 or more. Just click HERE Ā for details.

Conservamom’s little man whom she lovingly refers to as 4.0 is turning 1 and to celebrate, she has hand picked a package of their favorite diapers and products sure to make any baby and mama happy!

Enter to win! Make sure and come back daily for extra chances to win.

Giveaway is open to US residents only!

A special thanks to our awesome sponsors:

Don’t miss out on this great celebration, and maybe you will win an amazing Diaper Package!

Note- My Life: A Work in Progress is not responsible for the fulfillment of the prize. This giveaway is in no way associated with Facebook, Twitter, Pinterest or any other social media.