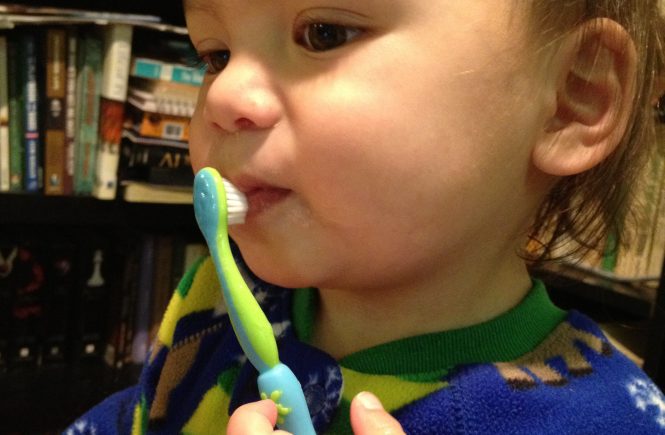 I’m in the process of going through old blog post drafts that I never finished writing, and I found this one that I meant to post almost 3 years ago!

Well, this post is a looooong time in coming. This summer (and now fall) has been crammed full for us with Hubby coming home, our move, and my new job, and I have just been too busy to blog! Little J has actually been using the toothpaste for months.

This is probably going to be my last Nuby post, as well. :/ We’ve loved¬†the products we’ve received and that we’ve bought ourselves in store (love, love, love all their teethers), but Little J is getting too big for most of their products.

This year Nuby rolled out their all-natural Toddler Training Toothpaste and toothbrush. The toothpaste is fluoride-free and non-toxic; it’s safe if your little one accidentally swallows a bit. It took Little J a while to understand he’s supposed to spit the paste out completely, so it’s good that it’s safe!

I’m probably not taking Little J to the dentist until he’s at least 3, but in the meantime I want him to develop good dental habits. As part of his bedtime routine, we always brush his teeth. It definitely helps reduce plaque, and it freshens his breath. It has a Tutti Frutti flavor that he really likes; I have to monitor him VERY carefully, or he will use too much!

I think this is a great starter toothpaste, and you can buy this training toothpaste with the included toothbrush at stores like Toys”R”Us, CVS Pharmacy, and Kmart.

Have you tried Nuby’s Toddler Training Toothpaste and brush? What did you think of it?

Note: The products in this post were provided to me free of charge, but the opinions are my own. 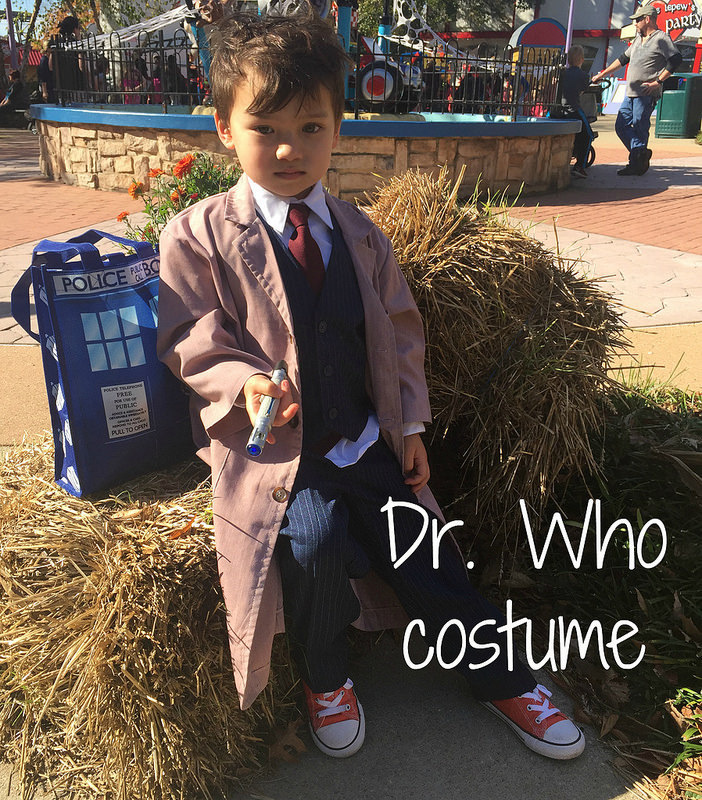 This year Little J wanted to go trick or treating as the 10th doctor from Dr. Who. I tried to persuade him to go as the 11th doctor, the Matt Smith version, but no, he wanted to be the 10 doctor, David Tennant. I don’t have anything against Tennant, but the Smith costume would have looked soooooo cute with the¬†bowtie and boots! Tennant is still awesome though, so I was thrilled to put together this kid’s Dr. Who Halloween costume for Little J. I’ve had a few people ask where we got his costume from, so I thought I’d break down all the pieces. I bought almost everything on Amazon, and please note, I’m using affiliate links below.

I looked around for a kid’s trench coat, but it was hard to find one that was brown and for a boy. The coats meant for girls weren’t cut the way I needed. They were shorter and flowed out like an empire waist. So¬†on the advice of a friend, I bought a kid’s lab coat on Amazon with the plan to dye it tan. I bought the Aeromax Jr. Lab Coat in 3/4 length in the Child, 4-6 size. Little J is on the smaller size for a 4 year old, so I figured it would be a bit big for him (it was), but I needed the coat to be long since that’s part of the entire Dr. Who look.

When it arrived, the length was perfect for Dr. Who, but the sleeves were too long, and the coat was a little wide. I cut the ends of the sleeves off by a couple of inches and sewed a new hem on them to make the sleeves shorter. I also gathered¬†in the sides of the coat a little bit under the arms and sewed a new inside seam just for a few inches under the arms.¬†This probably didn’t need to be done though; I don’t think anyone would have noticed one way or another. I used a sewing machine for all of that, but really it was such little sewing that it could have easily been done by hand. I also replaced the white buttons on the coat with brown buttons (the fabric dye didn’t affect the white button color at all, so they had to change).

Finally, I dyed the lab coat with Rit Liquid Dye. I tried the Camel¬†color first, and that really wasn’t dark enough, so I dyed it again with a Rit Dye Powder in Dark Brown. This was the first time I’d ever dyed fabric, but it was pretty easy. You can find the dye at Walmart, Harris Teeter and Amazon. I bought a large plastic bucket from Lowe’s to dye the coat in and just followed the directions. The end result wasn’t a perfect color match for Dr. Who, but we were happy with it. More importantly, Little J was happy!

I spent a lot of time online looking at a brown pinstriped suit and a blue pinstriped suit. The 10th Doctor wore both. This brown pinstriped suit looked amazing, but the size we needed wasn’t available for Amazon Prime shipping. I was worried we wouldn’t get it in time, so I started focusing on a blue pinstriped 3-piece suit and a 2-piece version of the same blue suit. Because of the cost, I ended up getting the Spring Notion 2-piece version, and it worked out well. Although the 2-piece had a vest, not a suit jacket, I don’t think the overall Dr. Who look suffered because of it, especially with a coat over all of the costume.

I bought Little J this French Toast boy’s long sleeved white shirt and this French Toast adjustable tie in burgundy (size 4-7). At this point, you can probably tell this wasn’t a cheap costume, and that’s true. One of my justifications though is that he now has a nice church outfit! He’ll be wearing his “costume” minus the coat on the Sunday after Thanksgiving.

This part was easy. We had a pair of orange Chucks for him that we’d bought earlier this year at a Converse outlet store. They were still a little big as he’s meant to grow into them, but he fit them well enough that we could pull them out for this costume. Dr. Who actually wears cream or red Converse shoes, but the orange still really did the trick.

The 10th Doctor would not be the 10th Doctor without his sonic screwdriver, so that’s what we bought. Last of all, the Doctor needs his TARDIS, so I bought Little J a TARDIS tote bag to haul his candy in.

For the hair, I literally just let my son grow his hair out for two months and used lots of gel in it and messed it up! If he had different color hair or it were shorter, I probably would have bought him a wig. And that was it! We had a few people who had no idea who Little J was dressed up like. We got Harry Potter, a lawyer, and vague “little gentleman.” But for the dozen or so times someone recognized him as Dr. Who? Totally worth the effort!!! 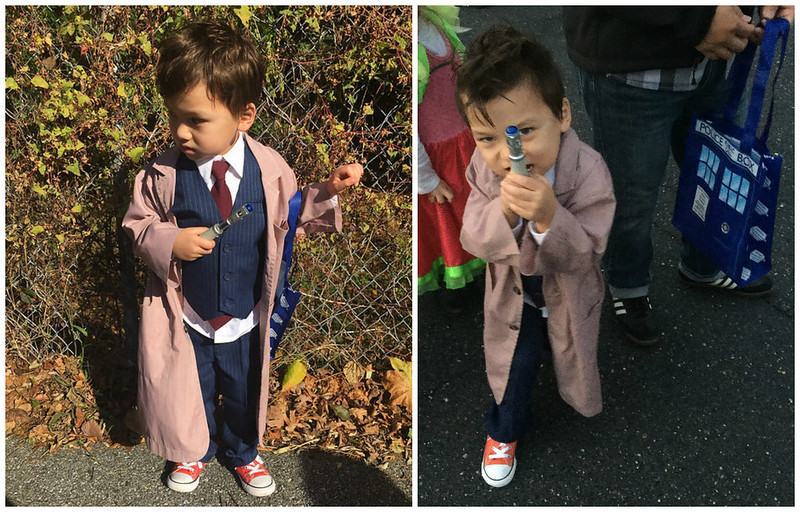 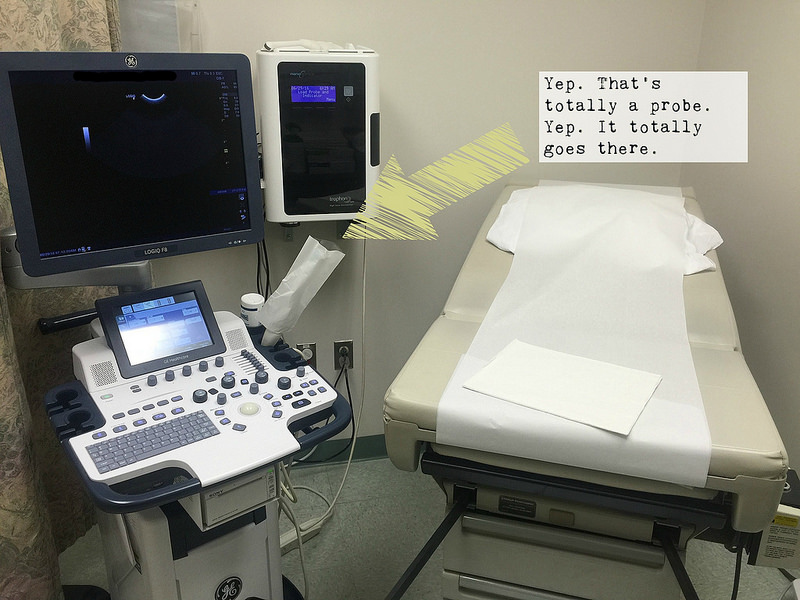 1. I’m thankful that I have a child and that my infertility is considered secondary.

2. Secondary infertility (the inability¬†to bear a child after you’ve had one or more) accounts for more than half the cases of infertility in the U.S.

3. Statistically, infertility is just as often caused by an issue on the man’s side as it is on the woman’s.

4. Shockingly few health insurances cover any fertility services at all.

6. Savor the wine when you have another negative pregnancy test. Silver lining?

7. Some ovarian cysts are good! Eggs come from follicles which are actually cysts in your ovaries.

8. Despite what they imply¬†in health class, if fertility is optimal, you still only have about a 20% chance of conceiving.

9. Other people’s pregnancy announcements are better on Facebook than in person. If it’s on Facebook, you can click “like” and mostly ignore it. If the announcement is in person, society expects you to smile and say, “congratulations,” even if you feel like someone just punched you in the gut. (EDIT: I truly appreciate the women who have pulled me aside and told me privately that they were pregnant, so I knew before the big announcement. This is totally okay, and your compassion means a lot to me.)

10. If twins run in your husband’s family, that has absolutely no bearing on whether or not you’ll have twins. Sorry, no, it doesn’t.

11. Fraternal twins are caused by hyper-ovulation (two eggs are released). Most often, medication causes this.

12. Identical twins are completely random and by chance. One egg is fertilized and then splits into two.

14. I’m aware that my son may always be an only child, and I worry about the disadvantages. Is he lonely? Is he spoiled?

15. I’m aware that if my son is our only child, he’ll have more opportunities than if he had a sibling. We probably couldn’t afford to put two kids through private swim lessons instead of group lessons.

17. I’m one “When are you going to have another baby?” question away from responding, “When my ovaries and uterus work.”

18. I’ve lost count of how many people have seen me naked from the waist down. Skirts are great.

19. The lab technicians recognize me when I walk in the door.

20. I have a really awesome little boy, and I am so thankful every day that God blessed me with him.