Warning: Use of undefined constant ĺ128Mĺ - assumed 'ĺ128Mĺ' (this will throw an Error in a future version of PHP) in /homepages/44/d160651214/htdocs/aworkinprogress/wp-config.php on line 91
 Nuby Tropical Teether Pals- My Life: A Work in Progress

A few days ago, a box of N├╗by products arrived for Baby J and I to review. As soon as Hubby opened the box, Baby J immediately grabbed the Tropical Teether Pal out of the box and played with it for at least the next 30 minutes.

There is an off switch -FYI- in case your baby does the same, and the sounds are driving you nuts! I actually don’t mind the toy sounds or music. I’d rather hear that than crying and whining. 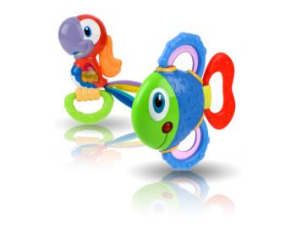 I’ve always thought N├╗by teethers were awesome, long before I became an ambassador for N├╗by. Although he didn’t cut his first tooth until eight months, Baby J was gumming/chewing on things at just a few months old. We tried a couple of teethers (none from N├╗by) that he couldn’t hold or chew on very well, until I came across the Teethe-eez by the N├╗by Natural Touch brand. That was his favorite in the early months, because no matter how awkwardly he held it or turned the teether with his uncoordinated little hands, he could get a chewable part in his mouth. The N├╗by IcyBite Hard/Soft Keys were also a preferred toy…though he always chewed on the ring…not so much the keys. Those were fun for banging on things. I’m not sure how Baby J would’ve liked this when he actually started teething, because I melted the keys in the dishwasher. *hangs head in shame* Yes, the directions clearly stated to not push them in the dishwasher. No, I don’t know what I was thinking. You can watch a much younger, balder, and chubbier Baby J playing with the keys HERE.

N├╗by’s BPA-free Tropical Teether Pals are teethers/toys that provide several types of stimulation for babies 6 months and up: tactile, visual, and musical. Each character lights up and plays sounds, as the baby is playing with the toy. The teethers have hard and soft teething surfaces (see my experiences below regarding this) to help new teeth emerge, and the teething nubs massage sore gums. These teethers┬áare sized for little hands, with plenty of areas to grasp.

Well, as I mentioned at the beginning of this post, Baby J immediately snagged his pal and played with it for a good 30 minutes. I took it away briefly to get it out of the packaging, of course. When I did, the teether didn’t play any sounds, and I thought I had a defective teether! It took me a good minute to realize there’s a tiny on/off switch. Crisis averted.┬áWhen your baby’s not using it, you may want to turn the switch to off. The teether randomly goes off on its own sometimes when it’s on the floor. I think it might be the floor vibrations setting it off.

The first day, Baby J actually didn’t chew on the teether that much. I think he was too distracted by the sounds. He just dragged it around our home with him. Eventually, he did start actually gnawing on it! The Nuby website says Tropical Teether Pals have a hard and soft teething surface, and it looks like the parrot does. However, the fish that we received only has hard teething surfaces. I’ll be letting Nuby know, so they can update their website. Finally, on Amazon, the product “Care Instructions” state this teether is dishwasher safe on the top rack. I threw away the packaging immediately, and now I’m kicking myself for it, because I’m curious if that is an error or true. I don’t really want to risk experimenting on the top rack and then ruining the teether. Washing with soap and a rag seems better, since it is battery operated. Perhaps some of the other Nuby moms can shed light on this?

Update: Nuby has informed me the Tropical Teether Pals are not dishwasher safe, so don’t do what I did. Always save the packaging and care instructions!

Watch the video below to hear the Tropical Teether Pal’s sounds. We received the fish, but there is also a parrot version available.

For updates on new N├╗by products, follow them on their social media accounts (listed below). Right now they’re having a “show off your ultrasound photo” contest. You could win a prize! Visit them on Facebook page for more details.

If you liked my review, please consider voting for me at Top Mommy Blogs and the Picket Fence. Just click once HERE and HERE. Thank you! 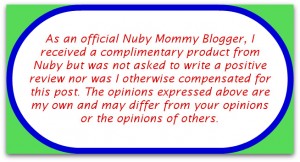