Warning: Use of undefined constant ĺ128Mĺ - assumed 'ĺ128Mĺ' (this will throw an Error in a future version of PHP) in /homepages/44/d160651214/htdocs/aworkinprogress/wp-config.php on line 91
 Asherliz Designs AI2 cloth diaper review- My Life: A Work in Progress

Stefanie is the designer and seamstress behind AsherLiz Designs, a WAHM (working-at-home mom) cloth diaper line.

“Hi, I’m Stefanie! I started CDing with my youngest and quickly became addicted! One of the reasons I decided to go with CDs was to save a little money. So naturally, that lead to me making the diapers myself. Soon after, AsherLiz Designs became a reality! The name is inspired by my kids, and everything I offer in my store, I use with my kids too.”

Stefanie sent me an adorable all-in-two (AI2) diaper to review! An AI2 diaper consists of two parts: a waterproof outer part that can be used more than once and an inner absorbent part (soaker) that is be replaced as it becomes wet or soiled.

The outer layer of this diaper is made with a cotton knit fabric overtop a hidden waterproof PUL layer.

This AI2 is a one-size diaper, meaning it can fit most babies from 10 lbs. to 35+ lbs. The diaper size is adjusted by the rows of snaps along the waist and rise. 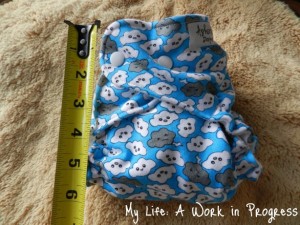 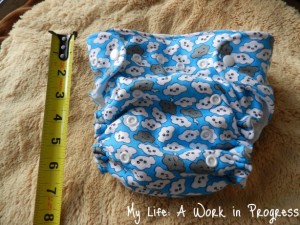 The inside of this diaper is made with cuddle dry microfleece. 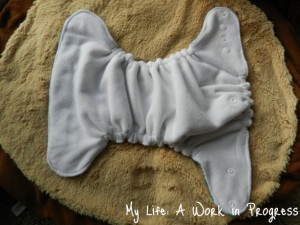 This diaper comes with a size-adjustable soaker that snaps into the diaper. The soaker is made of 1 layer of cotton velour and 1 layer of heavy organic bamboo fleece sewn together.

The soaker has two snaps to adjust the size. By folding the top of the soaker down and using the lower snap, the soaker better fits smaller babies.

Here’s a shot of the diaper in action:

Sorry about the blurry photo; my model is mobile and extremely squirmy!

Our experiences with the diaper:

About 2 hours after I first put this diaper on my son, I checked for wetness. The soaker was damp on the bottom half, so I went ahead and changed it. The diaper cover part itself felt dry. This time, I used a medium-size Diaper Rite prefold folded under and placed inside as a doubler. Since the prefold was quite large, I undid all the rise snaps, and my son wore the diaper on the largest rise setting. After 2 more hours, I changed him again. The cover maybe, maybe felt a little damp, but I wasn’t quite sure. I went ahead and set it to the side until later in the day to let it air out. When I came back a few hours later and smelled it, there was no ammonia smell on the diaper. I used the outer part a third time. This time, I used it with a small-size prefold, which fit better as a doubler for my son. When I changed the diaper after this third use, I noticed the microfleece on the diaper part was starting to feel wet, so I went ahead and put it in the diaper pail to be washed.

I have nothing negative to say about this diaper! I was impressed with how well the microfleece repelled the moisture back into the soaker. The outer and inner layers are very soft and comfortable, as is the soaker. It does exactly what it should do and looks super cute doing so! The stitching is even and the diaper has an expensive feel and look to it.

I also want to mention we were able to get a very nice fit around the legs: no gaps, and no leakage. 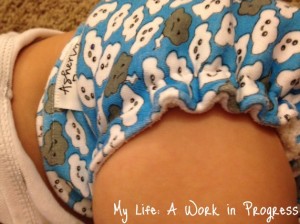 Besides AI2s, Stefanie makes fitted diapers, pocket diapers, diaper covers, inserts and soakers, and cloth wipes. While browsing through the photos on the AsherLiz Facebook page, I noticed this line offers many prints I haven’t seen at other diaper shops, so you’re sure to find something you like!┬áVisit AsherLiz Designs on Facebook.

You could win a winter-holiday themed AI2 diaper for your own little one during the Holly Jolly Jubilee 2012 blog hop! Giveaway starts Monday, Nov. 19, so check back here at My Life: A Work in Progress for your chance to win!

Note: I received a sample product to review.┬áI was not compensated for this review. The opinions are my own and may differ from yours.