Warning: Use of undefined constant í128Mí - assumed 'í128Mí' (this will throw an Error in a future version of PHP) in /homepages/44/d160651214/htdocs/aworkinprogress/wp-config.php on line 91
 Life First by RJ Crayton book review- My Life: A Work in Progress

I received a digital copy of the book Life First to facilitate my review. 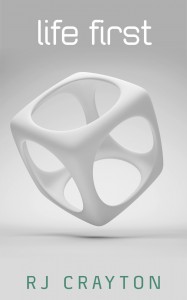 Strong-willed Kelsey Reed must escape tonight or tomorrow her government will take her kidney and give it to someone else.

In this future forged by survivors of pandemics that wiped out¬†80 percent of the world‚Äôs population, life is valued above all else. Those who refuse the obligations of ‚ÄúLife First‚ÄĚ are sentenced to death.

This was a ¬†tough book for me to read, although it was riveting and well-crafted. There were a lot of pregnancy-related issues, abortion, etc., ¬†that characters face. Those were a struggle for me to read as a mother. It was sad. It was also difficult to read as someone who’s adamantly against abortion in all circumstances. However, I don’t want to make it sounds like the book is about abortion, because it’s not. In fact, *spoiler alert* a doctor in the book has successfully performed procedures to remove the womb and baby to live artificially outside of the mother’s body, thereby saving both lives. Primarily, this book is about donating organs, because the government tells you to.

From a moral standpoint, this book made me think. Did you know that in the U.S. more than 118,000 people are on the transplant list? Almost 20 people die each day waiting for an organ.¬†I have always thought it’s terrible that in 2013, in a first-world nation, ¬†so many people wait in vain. I’m a registered organ donor. When I die, my organs, tissue, and eyes will go to people in need, and may save several lives. But would I willing give up a piece of my body for someone else NOW while I’m still alive? If my brother or my son or my husband or a friend needed my kidney or a piece of my liver, sure. But what if it was someone I didn’t even know?¬†What if I was the only one that could save that person’s life? Is it my moral responsibility to do so? Does the government have the right to force me to? Can they equate me to a murderer if I say no? What does the term “Life First” really mean?¬†Does the end justify the means?

To answer those questions: Honestly, I don’t think the government should force me to, but, yes, I would give up an organ if I was someone’s last hope- even if it was someone I didn’t know. But as a follower of Christ, my world philosophy is probably different than most people’s. I’m not scared of dying from surgery. My eternity is secure. But I can see where the character is coming from. If I died from complications, my son would be motherless. What happens to me affects others. See!? This book raises all sorts of questions and internal dilemma.

This story is written in first person, of which I’m not a fan (kind of funny, since most of my blog is written in first person). But as I read, I got used to it. I know it’s a popular way to develop the main character and connect the reader to that character.¬†Although, I am interested in learning more about the others. The story takes place very quickly, and since we only hear the story through Kelsey, I don’t learn that much about the characters, other than what she’s observed or they tell her. I may have missed the exact timeline, if it’s stated, but I think it’s 2-3 weeks from the beginning of the book to the end. There are two more books coming, which I’d like to read. I want to know if Kelsey and Luke settle into Peoria easily. Do they name their child Inga? Were they granted asylum? Does Kelsey’s story shake FoSS up enough that change is in the future?

If you like dystopian/post-apocalyptic fiction, then¬†Life First will make¬†you think, and it’s a page-turner. It will keep you hooked all the way to the end.

The author, RJ Crayton, has an interesting blog, you may want to check out. I like her sense of humor! Currently, you can find the Kindle version of¬†Life First¬†on (affiliate link>)¬†Amazon

Note: I received one or more of the products mentioned above for free using Tomoson.com. Regardless, I only recommend products or services I use personally and believe will be good for my readers. The above post contains an affiliate link. If you purchase through that link, I will receive a small commission.¬†