I know I haven’t posted in a few days. I’ve been home with a sick and teething baby while hubby’s been away on his ship (I’m ill as well…boooo!). Sandy didn’t cause too much trouble for us here in Virginia Beach. It rained pretty much straight on from Saturday afternoon until Monday night, but the power didn’t go off.

When J walked in the door this afternoon…after being alone and sick with the baby…I was incredibly relieved to see him. As a new mom, taking care of my baby through his first illness definitely pulled on my heart-strings. I just felt so useless, you know? I tried everything, but I couldn’t make his misery and pain go away. Thankfully, today he seems much, much better. He was still very fussy and sleepy this morning, but he started to play with his toys in the afternoon, and his cough didn’t sound as phlegmy.

Before I realized my son had a cold in addition to teething, I was researching teething symptoms on the Internet. I was surprised to find out that many things I’ve heard about teething aren’t true. At least, there is controversy surrounding them.

For example, I’ve always heard that teething often causes fevers, and diarrhea. Turns out quite a few researchers and pediatricians say that’s not so…that it’s only coincidence that babies have fevers and diarrhea while teething.

Anyway, this got me started on thinking about all the Old Wives’ Tales I heard while I was pregnant and after birth. I think the biggest one I’ve heard is what you eat gives your baby an upset tummy or gas. This is almost never true! But even the nurses in the hospital after I gave birth told me that my son was so gassy because of the broccoli I ate as part of my first postpartum meal. They kept saying that it wasn’t normal for newborns to have stinky gas. Personally, I think he had smelly gas because of the meconium he’d swallowed. 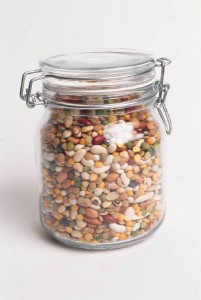 From talking to other moms, I’ve realized that quite a number of women believe eating foods high in fiber will give their babies gas. However, food like veggies and beans don’t cause gas until they react with bacteria in your gut. Unless something gets into your bloodstream, it can’t pass to your baby through breastmilk. If a baby is showing a reaction to something a woman ate, it’s probably a response to dairy, since lactose from cow’s milk breaks down and enters the bloodstream.

That said, I know there are many mammas out there who insist it’s not in their heads, and that their babies always react to a specific food they eat.

What do you think? Do the docs have it wrong? Have you noticed your baby react negatively to something you’ve eaten? What advice have you heard that you think is an Old Wives’ Tale?